CCAP: The Good, the Bad, and the Ugly

Do you know about CCAP?  If you're in this business of rental housing (as a tenant or landlord), I bet you do.  It's this magical land on the interwebs where you can find court records (the public parts) for people who have records in Wisconsin. (Click here for your digital portal into wonderland**).

There's a lot that people don't understand about CCAP, though. CCAP has limitations, and it's important to be aware of them in order to use it most effectively, both in order to protect yourself, and in order to understand the people whom you may be screening.

Here's a pretty typical scenario we see here at the TRC: a tenant comes in to talk to a housing counselor here. This tenant has been living in a rental for a while, and is a normal tenant (not excessively good or bad). Tenant is trying to move, and suddenly he's being denied housing due to an unknown eviction hearing that's on his record from last year. He comes into our office, wondering what he can do.

(How could this happen, you say? I know, I love the stories, too. Let's say, for argument's sake, this is a situation where the tenant lived with a roommate, his name was on the lease, but he moved out and somebody else moved in, and things went sour from there.  So, the tenant wasn't a part of the fallout, and was accidentally named on the hearing because he was initially on the lease, even though he really didn't have anything to do with the problems that came up.)

So what can he do? Probably not a whole heck of a lot. But we can all do more to understand what CCAP does and doesn't do well. Possible steps for folks like our unlucky tenant are also below.

CCAP is kind of magical because it feels kind of like an unlimited well of information. Everything you could ever possibly want to know about someone else, right?  Well, not exactly. The way we see it, there are 2 main limitations:

1. Records stay online for a while. Evictions, other small claims records, and some criminal cases can stay on for 20 years. Other criminal stuff stays there for 100 years. Wis. Stat. 758.20(2)(a), 2017 Wis. Act 317, Sec. 46, Eff. 4/18/18. Click here for more information. Sometimes just the initial hearings will stay on record, but if you don't know how to find out about the outcomes of the hearings, or how to understand them, it can lead to a false sense of who this person is.

If you see an eviction case on CCAP and the new laws say it should have been removed by now, you can file a form saying they have an error online, and see what happens. That error form is here.

When dealing with eviction and small claims records, to get the best information out of CCAP, it's important to click on the sidebar link (inside the record) that says, "Court record." It looks like this: 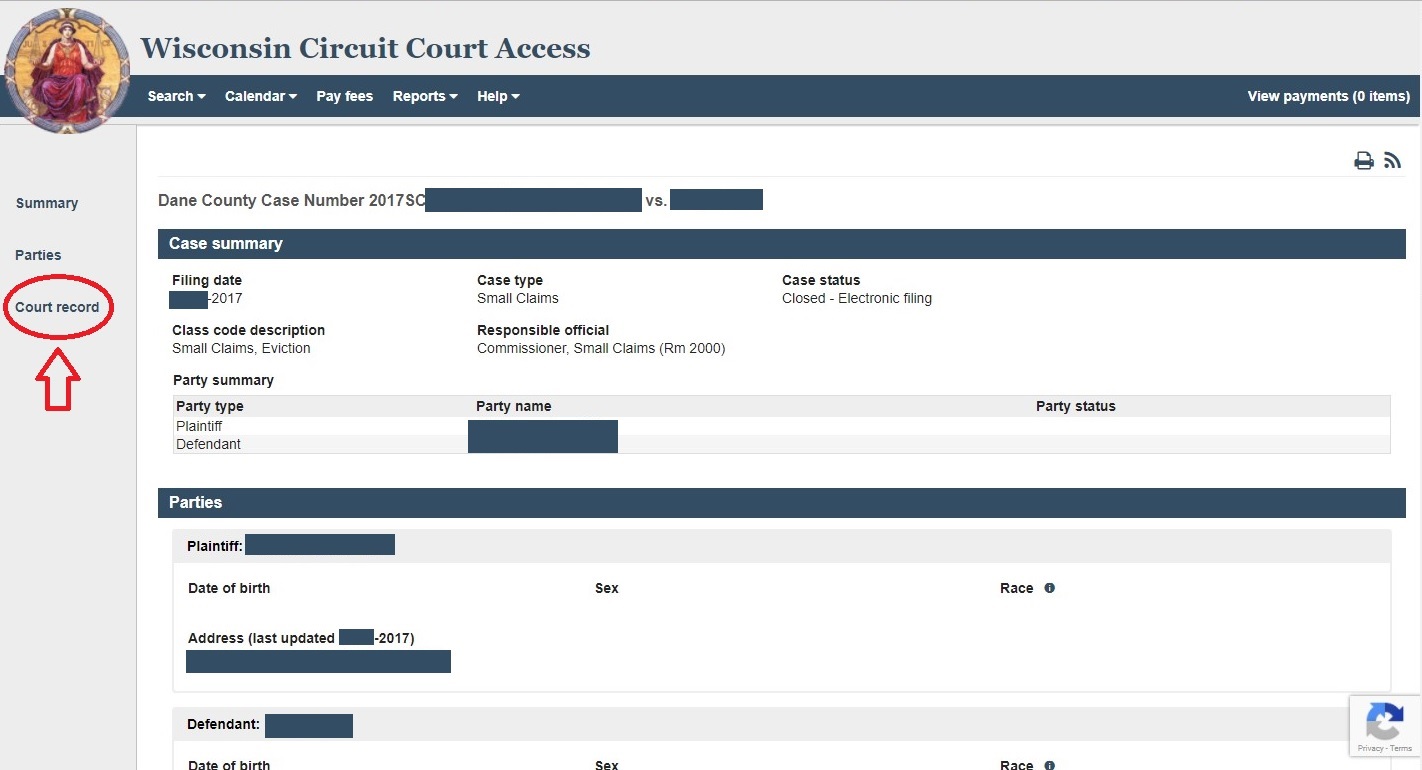 For evictions, once you click or scroll down to "Court record," the entry with the most recent date should tell you what has most recently happened.  But what does it mean?*

NOTE: A stipulated dismissal is not the same thing as an outright dismissal!

2. You don't know what you don't know. Some counties in Wisconsin didn't put records online until well after the start of CCAP (what's up Portage County?), some cases for folks under 25 years of age are sealed. The name could be weirdly common, the person could have lived out of state for a long time (so their criminal records would show up on a nationwide background check, but not Wisconsin's; their credit history would show debts to landlords, but CCAP wouldn't). Folks with the means to pay for really good lawyers will have less of a record, probably, than someone who can't pay for any legal counsel at all. African Americans and Latinos are imprisoned at much higher rates than Caucasians, especially in Wisconsin (more info here and here). Take it all with a grain of salt.

As of 4/18/18, the laws make it much easier for tenants to remove eviction cases from their CCAP record (as well as removing all other small claims court cases, such as money cases). If the eviction case was dismissed, and there is no docketed money judgement, it will be removed after 2 years. If there was a writ of restitution (the tenant was evicted by court order) it will be removed after 20 years. Wis. Stat. 758.20(2)(a), 2017 Wis. Act 317, Sec. 46, Eff. 4/18/18. Other types of cases (including some criminal cases) also have new, shorter time periods for staying on CCAP. Click here for more information.

For the tenants who are struggling with an eviction record on CCAP before the 20 years are up, there's not a lot that you can do. In our example, the eviction was probably legal - the original tenant was probably joint and severally liable, and the problems that occurred after he left really happened.  If, however, the eviction were somehow not legal, or didn't follow the law, it might be possible to do something about it (info on evictions is here). Possible solutions include:

* Hi! Did you know that we aren't attorneys? This isn't legal advice, either. If you want legal advice, contact an attorney. If what we wrote doesn't seem right to you, double check with someone you trust.  And if we made a mistake, let us know.

** Edit on 1/4/18: CCAP has a new website! It's been changed here, along with the up-to-date photos, but most of the other information remains the same.